Back to overview
Dance

Sacre by the French choreographer David Wampach is a radical adaptation of the legendary Sacre du Printemps. The original ballet by Nijinsky to Stravinsky’s music was innovative in every possible way and its première in 1913 caused great scandal.

Wampach in his turn renews and rethinks it. Of the original music he retains not more than two chords. Also Nijinsky’s choreography is reduced to a handful of essential movements for two dancers (Wampach himself and Tamar Shelef). The true source of inspiration is the original costumes by Nicolas Roerich. “I approach  Sacre du Printemps from the costumes because they have always been equally important as the dance and the set in my earlier work : costumes that hide and reveal, dress and undress.”

What appeals to Wampach in the original Sacre is the rite, the state of ecstasy, the high and the flush. The dancers –the sacrifices- move over the stage imprisoned by fear. They breathe heavily, they pant, they hyperventilate and are dragged along in the exhausting crescendo which irrevocably leads to the advancing climax. 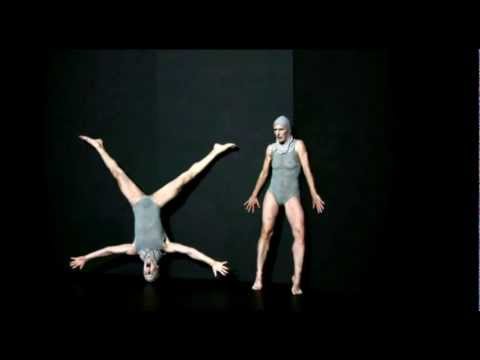