Back to overview
Theatre / Music

Sharp cry of alarm against nationalism, for choir and orchestra

HYMN TO LOVE  is an orchestral time bomb and a razor-sharp complaint   against a Europe that closes its borders. Marta Górnicka, founder of the famous Chorus of Women, wants to raise the alarm against the nationalist revival, which also started in her heimat Poland. HYMN TO LOVE  discusses how every nation likes to forget its past. And how, at the same moment, the past relentlessly repeats itself.

This work mixes patriotic, religious or traditional songs with the rap culture. A choir of twenty-five singers condemns the hyprocrisy of the rulers and wants to remind us of our black history. In this energetic piece of music Górnicka and her choir stand on the barricades to question notions such as 'we' and 'they'. A necessary reminder in hard times.

Marta Górnicka has developed a special method for vocal training that aims at finding an organic voice. She has given workshops about this method worldwide. Górnicka is also appreciated as the founder of the famous Chorus of Women. Magnificat, the second production of the choir from 2012, was showered with awards.

Two years later MOTHER COURAGE WON'T REMAIN SILENT . A CHORUS FOR WAR TIME  premièred in Tel Aviv. For this Górnicka brought together a sixty-headed choir of Arab and jewish mothers, Israeli soldiers and Arab children. In this way the performance gave groups from conflicting communities an opportunity to express extreme emotions and to start off an indirect interaction, while otherwise they are separated by an invisible barrier.

The success of the piece led to another project, M(OTHER) COURAGE  in which Górnicka spoke out against the neonationalist madness and the terror in Germany and Europe. Her choir wondered which fear is comprehensible for the other and which one is rather irrational. For instance, it drew attention to communities that see nothing outside themselves. Nacktkritik.be called it one of the best German-speaking performances of 2015. 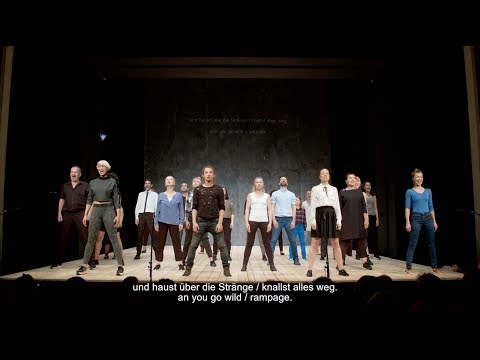