Back to overview
Theatre / Performance

Don't we deserve grand human projects that give us meaning?

Since they met when they were 15, the Ghent tandem Frank Merckx and Robbert Goyvaerts have been building a completely unique universe. In Don't we deserve grand human projects that give us meaning ?  the duo seeks out the intersection between visual art and theatre. Robbert&Frank Frank&Robbert go in search of meaning. Can they still find it in this world without a Big Story ? The artists split up and duplicate themselves like atoms in an imaginary cosmos of primary colours. Winking at space travel and science they construct a new logic. Their disorientating performance juggles with perspective, magnetism and video. A feast full of imagination !

In 2012 Merckx and Goyvaerts graduated from the Ghent KASK, department Multimedial Design. The young makers won the annual Horlait Dapsens prize for their first performance A journey into Space  and were selected for the European Start Prize 2012. In the same year the performance was also selected for the Young Work section of Theater Aan Zee. Successor TO BREAK – The Window of Opportunity was selected in 2015 by the jury of The  Theatre Festival for Circuit X, a quality label that wants to offer a wider platform to surprising performances by less known makers. Next to their performances the duo also builds location-specific installations even as far as Dubai. For the project GO AWAY SORROW OF THE WORLD  in which they unfold wooden cases with the title message all over the world, they were nominated for the Celeste Prize 2016.

If artists were the barometer of what is stirring in our contemporary society, the work of the duo Frank&Robbert Robbert&Frank gives a variegated sampling. Completely permeated with the spirit of the age and along with the rhythm of an onrushing globalised world they swiftly build a multiform oeuvre as a well-oiled team. Visual art, video work, theatre, performances... The duo smoothly strings together various artistic techniques and forms of expression, thus building an oeuvre that doesn't fit within one style or medium.

Robbert&Frank Frank&Robbert / CAMPO
Don't we deserve grand human projects that give us meaning? 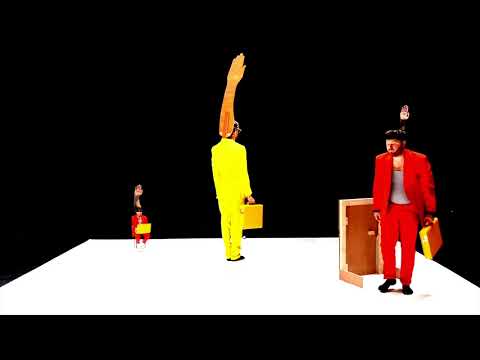