The striking similarities and contradictions in their work and life prompted Pieter Ampe (B), Guilherme Garrido (P), Hermann Heisig (D) and Nuno Lucas (P) to make a performance together.

They wanted to make something fantastic out of something trivial. However, forming a team appeared not to be as simple as they had hoped. Gradually their concept took definite form. What makes a community of a group of people ? What is the role of self-interest and does it always take precedence over a higher purpose ? What prevails – the social need to belong or the desire to be able to be oneself ?

Nuno Lucas (°1980) discovered his talent to entertain an audience when he was 5. After studying economics he fully concentrated on his dance career. Hermann Heisig (°1981) already created dance solos before he started his training. Pieter Ampe (1982) was bitten with a passion for theatre thanks to the workshops of the Gentse Speeltheater (now Kopergieterij). He got his training at P.A.R.T.S. and then began to create himself. Guilherme Garrido’s work is related to dance, choreography and visual art and always contains a dose of warm, subversive humour. 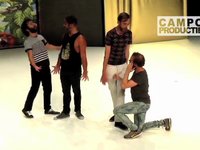